After years of waiting, the new BMW G30 5 Series sedan is here. The revamped high-selling sedan from the German car maker will hit the roads and markets around the world in February 2017. Further enhanced dynamics, an unbeatable line-up of assistance systems, an unmatched degree of connectivity and a new and innovative operating system are the most important new features.

The 5 Series is one of the highest-selling sedans ever to be produced by the German car maker, with more than 7.6 million BMW 5 Series cars were sold across its first six generations.

“The seventh generation of the BMW 5 Series points the way into the future, as we have defined it with our NUMBER ONE > NEXT strategy. We see technological leadership, emotionally rich products and digitalisation as essential factors in achieving success. With the expansion of our model portfolio in the largevehicle classes, we are satisfying the wishes of many customers. I’m in no doubt that the new BMW 5 Series will set new benchmarks technologically, but also have huge emotional appeal. It remains the epitome of the business sedan,” says Harald Krüger, Chairman of the Board of Management at BMW AG. 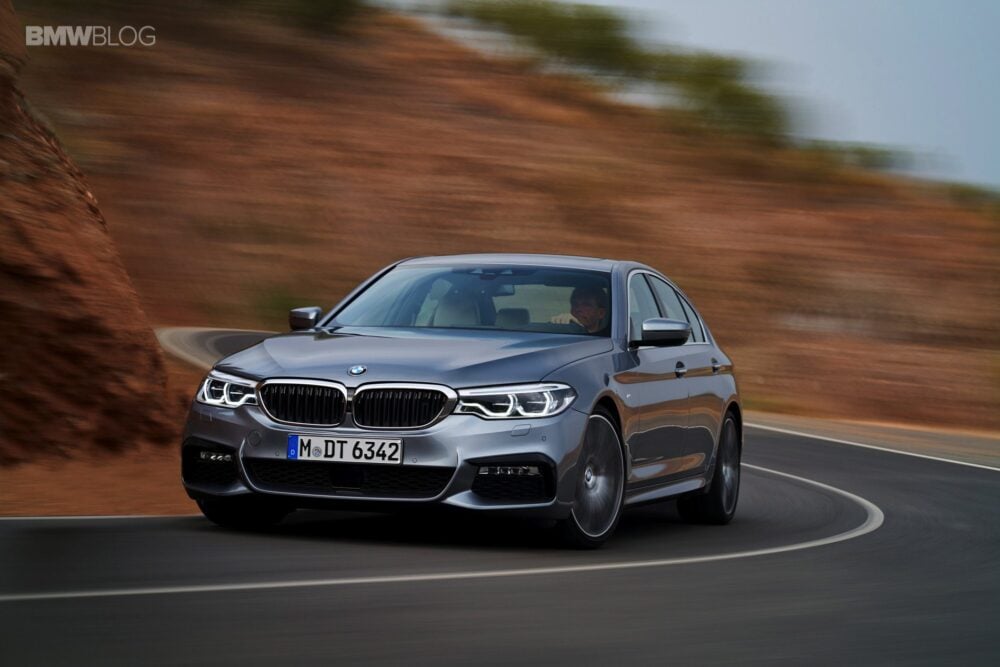 The new BMW 5 Series is up to 100 kilograms lighter to that of its predecessors. This is available thanks to increased use of aluminium and high-strength steels. The newly designed chassis, a low centre of gravity, BMW’s hallmark even weight distribution and a lightweight body offering exceptional torsional stiffness combine a wonderfully dynamic driving experience with the long-distance comfort for which the BMW 5 Series is renowned. 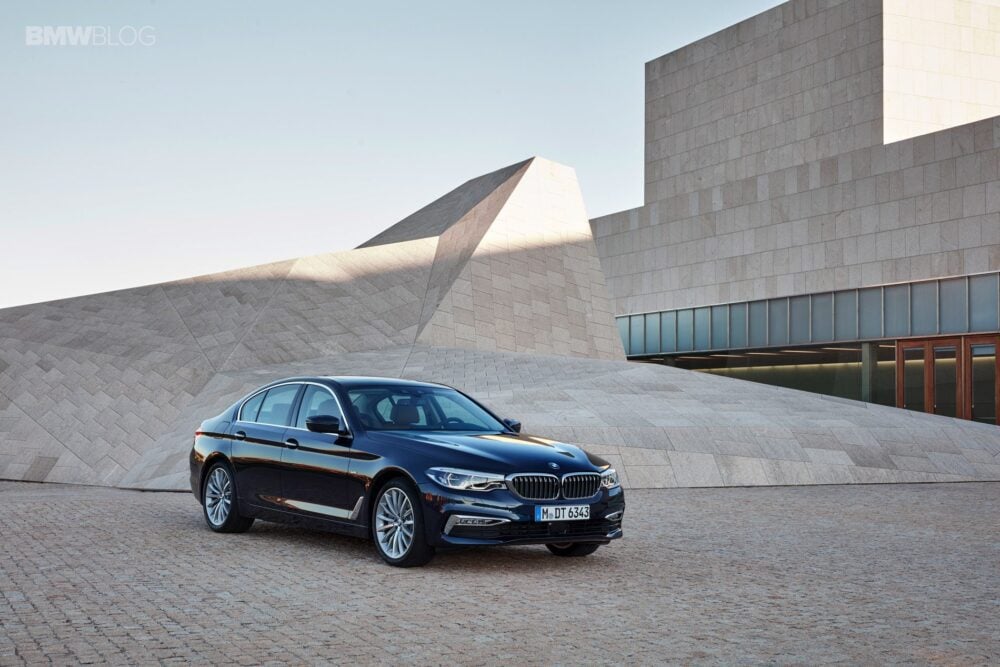 Various chassis options such as Integral Active Steering, which can now be teamed with xDrive intelligent all-wheel drive, add further talents to a dynamics focused overall package designed to ensure the BMW 5 Series once again stands at the top of its class. The drag coefficient of the new, 4,935 millimetre-long BMW 5 Series Sedan (Cd = 0.22 at its most efficient) sets the benchmark in its class. 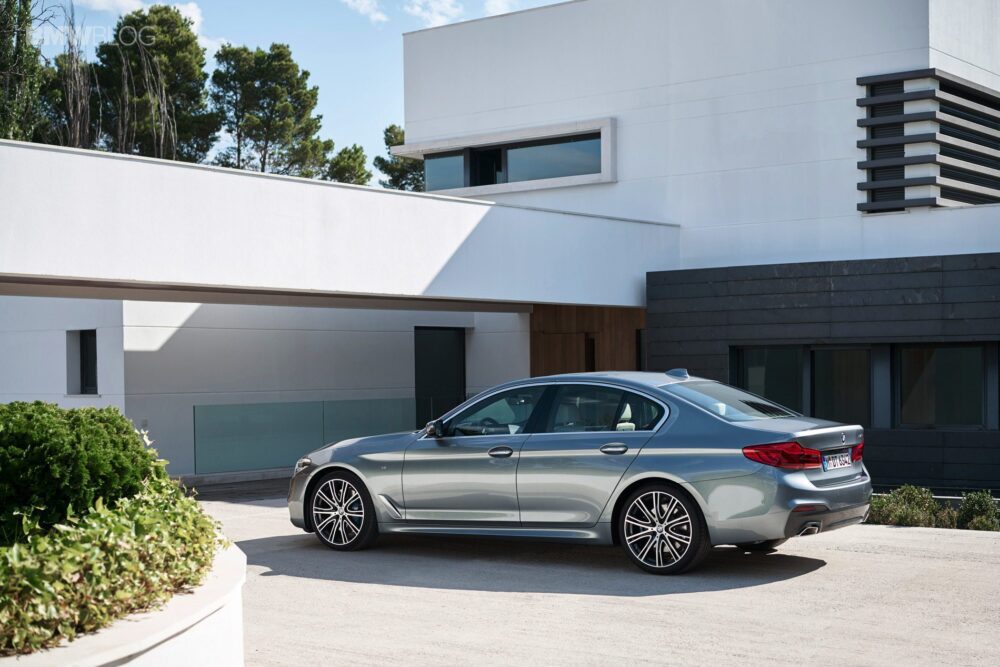 JUST A STEP AWAY FROM AUTOMATED DRIVING

With the all-new BMW 5 Series, a wealth of assistance systems is at hand for anyone operating this car. You’ll be able not only to utilize them at critical moments, but also also in less demanding situations at the wheel, such as traffic jams, slow-moving traffic and monotonous stretches of motorway.

The 5 Series now comes with standard equipment such as a stereo camera, which, when paired with an optional radar and ultrasound sensors, monitor the surrounding area around the car itself. 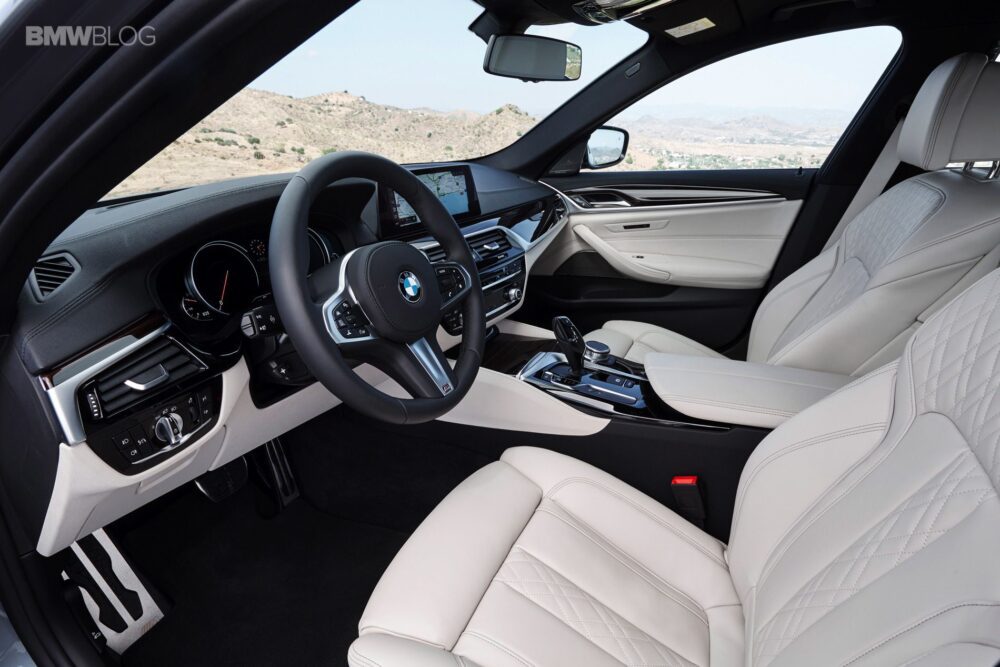 New features in the BMW 5 Series alongside the evasion aid and Crossing traffic warning are the Lane Change Assistant and Lane keeping assistant with active side collision protection. The latter keeps an eye on the lane markings and the area around the car, and actively helps the driver to avoid looming collisions by applying corrective steering inputs.

Another step forward is also taken towards automated driving, thanks to The BMW 5 Series also takes another step towards automated driving with extended functions for the optional Active Cruise Control (ACC) system and Steering and Lane keeping assistant. These include adoption of speed restrictions, which the optional Intelligent Speed Assist communicates to the cruise control system (the driver can adjust this figure by +/– 15 km/h / 9 mph). From rest to 210 km/h (130 mph), the car can relieve the driver of acceleration, braking and steering duties, as desired. The intelligent Auto Start Stop function now adjusts its responses to the route and traffic conditions and therefore offers even greater driving comfort. 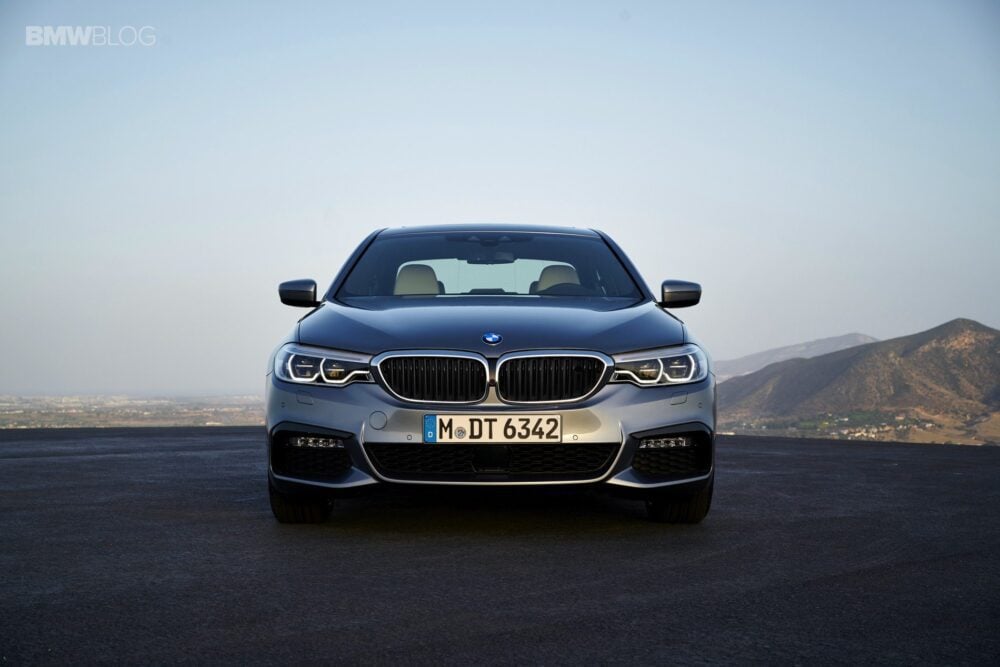 IN THE INTERIOR IT’S ALL ABOUT USABILITY AND EXTENSIVE COMFORT

The BMW G30 5 Series is equipped with the latest-generation iDrive system. In top specification, it displays navigation, telephone and entertainment features, plus vehicle functions, on a high-resolution 10.25-inch screen. 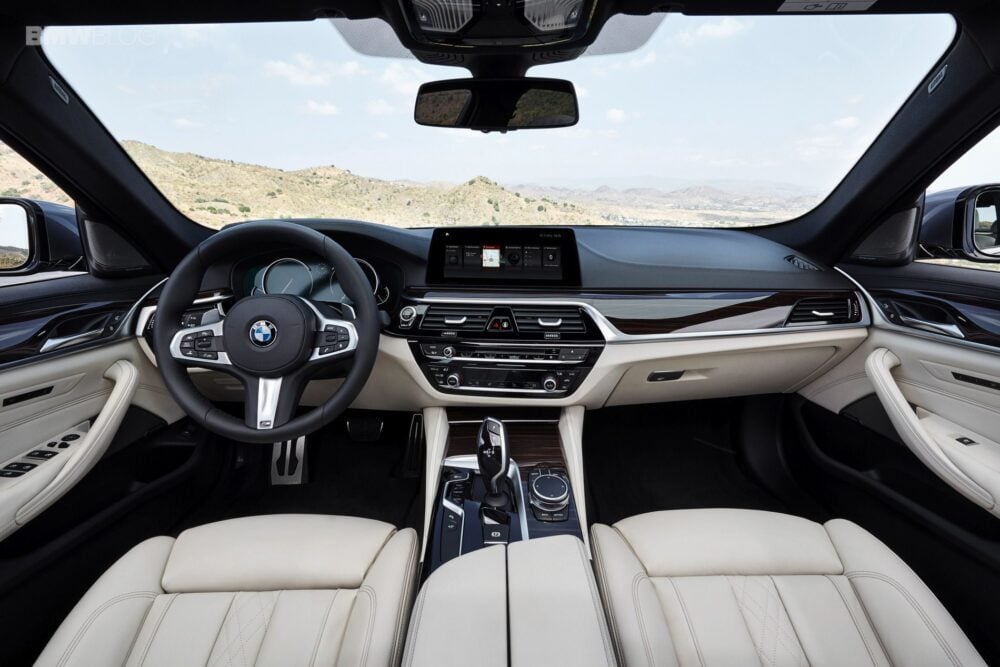 You can perform actions on this systems using the iDrive Controller, by voice command or gestures, or by touching the display controls directly, as the driver wishes. The large, tile-style panels can be arranged as desired and show the content of the underlying menus in constantly updated form. 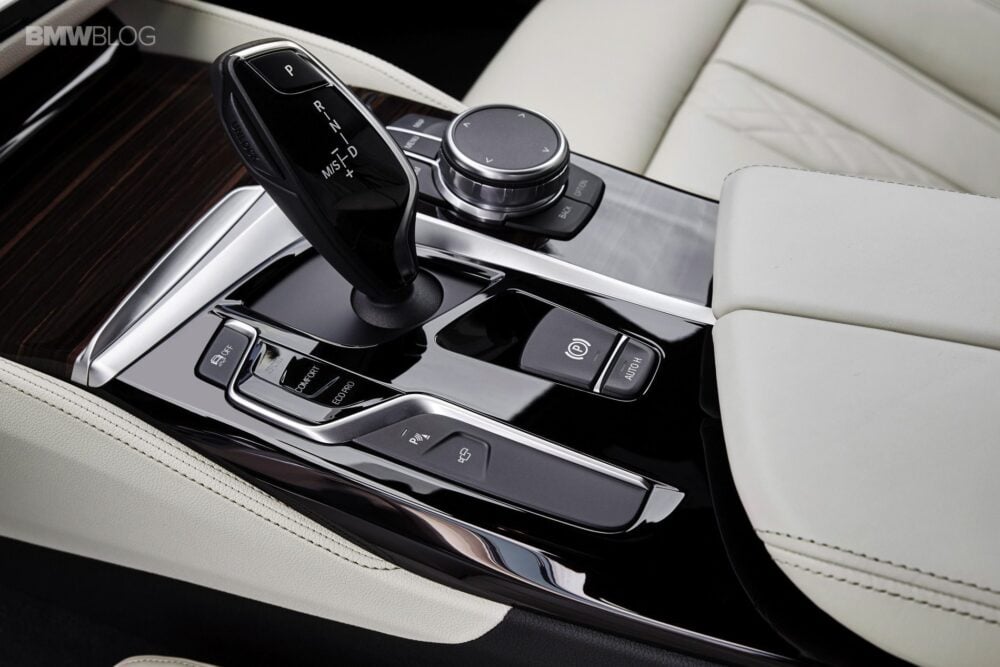 Include the  latest-generation full-colour BMW Head-Up Display, which has a projection surface that is 70 per cent larger than before and displays traffic signs, telephone listings, radio stations, music tracks, navigation instructions and warnings from the assistance systems and you don’t have to take your eyes of the road in almost any situations while driving this vehicle. 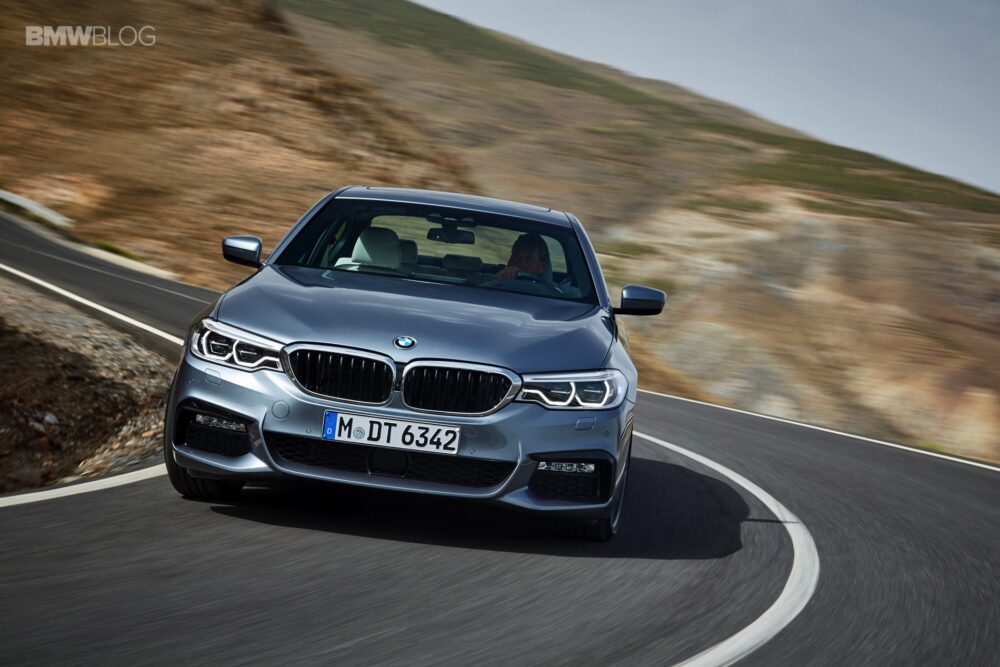 As for the levels of comfort, you will have more leg room for rear-seat passengers that come alongside comfort seats with massage function, not to mention innovative seat operation using touch sensors and four-zone climate control complete with ionisation and discreet air fragrancing. Special Synergy Thermoacoustic Capsule (SYNTAK) engine encapsulation technology, the acoustic glazing for the windscreen and the acoustic headliner bring about another noticeable reduction in noise levels inside the car. 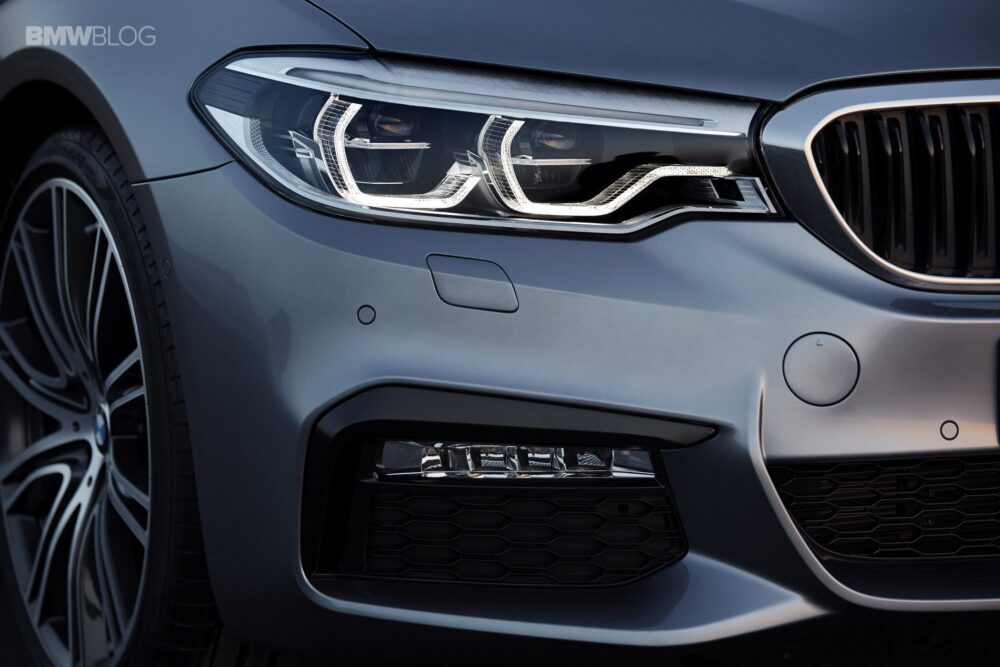 Include the standard BMW 5 Series Sedan headlights which utilize LED technology and your driving satisfaction is further increased, but, if you need an improvement on the LED lights, available as an option are Adaptive LED Headlights with variable light distribution including adaptive roundabout lights and BMW Selective Beam anti-dazzle high beam with a range of up to 500 metres. 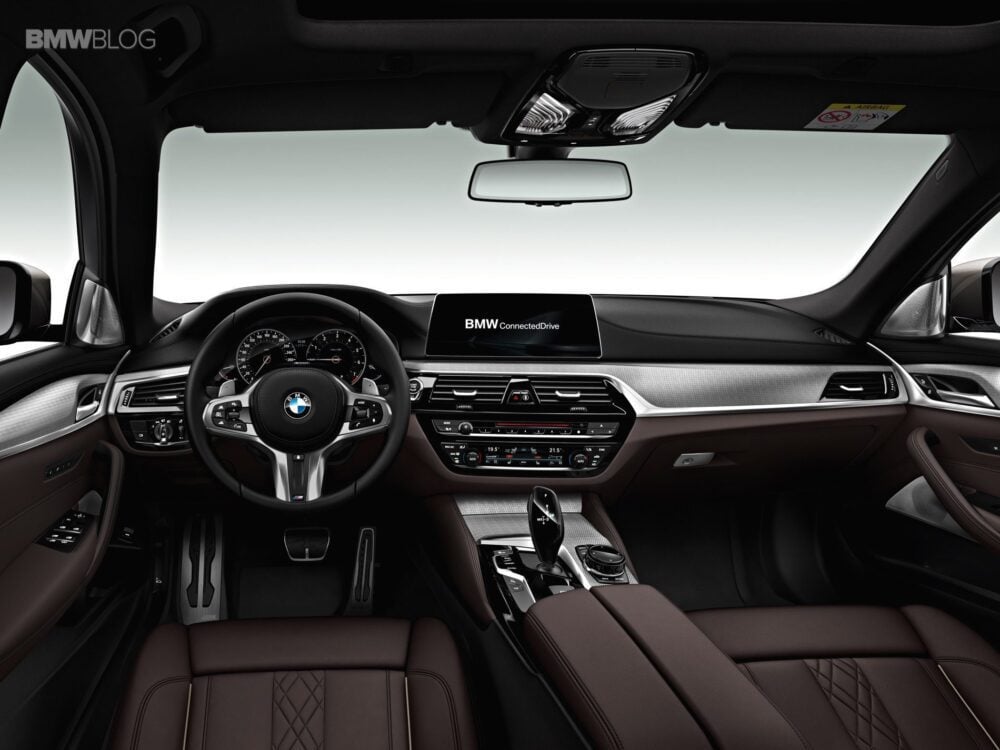 All the engines in the 5 Series Sedan line-up belong to the newly developed, modular BMW EfficientDynamics family of power units. BMW TwinPower Turbo technology imbues all the members of the family with outstanding performance combined with exceptional efficiency. Two diesel engines and two petrol variants will be available from launch, working in tandem with either rear-wheel drive or BMW xDrive intelligent all-wheel drive. 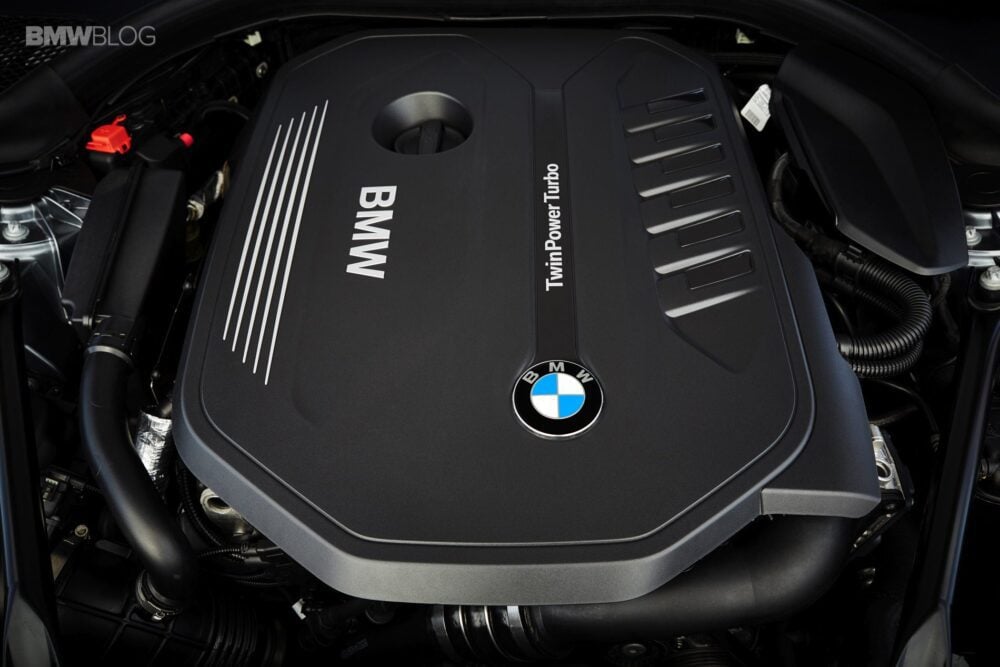 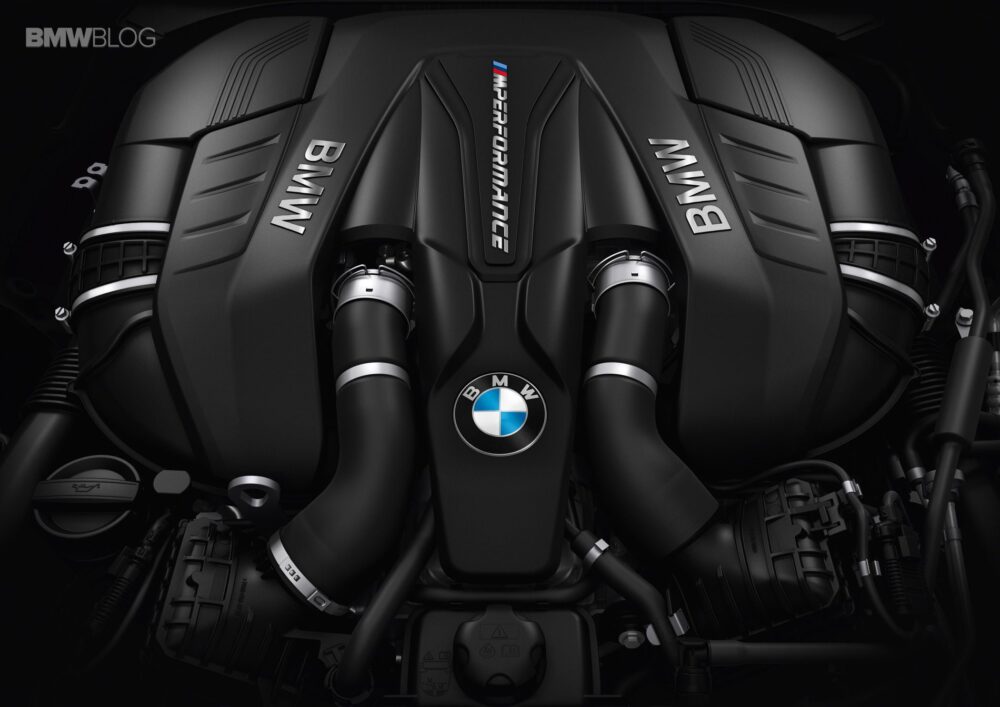 The CO2 champion, the plug-in hybrid and the eight-cylinder sports star

Not long after the launch of the new 5 Series Sedan, BMW will be adding another three engine variants to the line-up. The 140 kW/190 hp four-cylinder diesel engine will be presented in its most efficient form in the BMW 520d EfficientDynamics Edition with eight-speed Steptronic. Its CO2 emissions of just 102 g/km are the lowest in the sedan’s class (average fuel consumption: 3.9 l/100 km [72.4 mpg imp]*).

Also to come in March 2017 is a BMW 5 Series Sedan with plug-in hybrid drive system, in the form of the BMW 530e iPerformance. The combination of the BMW eDrive electric drive concept and a four-cylinder petrol engine produces extremely low CO2 emissions of just 46 g/km (2.0 l/100 km)*. System output is 185 kW/252 hp.

In March 2017 the BMW M550i xDrive will take over as the sporting highlight of the new BMW 5 Series range, for the time being at least.

DELIVERY, PRICING AND OTHER INFORMATION

The BMW 5 Series of the new generation will be launched on 11th of February 2017. For now, no pricing information have been revealed, but we expect it to stay within the price ranges of the BMW F10 5 Series overall. The vehicle comes with less weight, improved and more powerful engines, that save fuel and provide more performance, a better interior, a whole slew of gizmos and gadgets and with a great design. We definitely love what we see, so take a look at the full media gallery of the latest generation BMW 5 Series in wallpaper sized resolution right below.