For some reason, everybody simply neglects the modern, but older generations of the Porsche 911 right now. The Porsche 997 Turbo clearly the victim of such neglect, it still is a gorgeous looking vehicle with a performance aspect that many of today’s high-performance sports cars can only dream of getting.

The facelifted Porsche 997 Turbo was unveiled at the 2009 Frankfurt Motor Show. Subtle changes were done compared to the first-generation of this model, giving it a more modern exterior look. Namely, while the facelifted model was left mostly untouched from the original 997 turbo, there are subtle changes to the rear lights, now being LED-type, among changes to the front lamps.

The Porsche 997 Turbo with this facelift received a revised engine, providing it with more power and torque available. A completely new 6-cylinder, 3.8 litre boxer engine was introduced, that delivers 500 hp (370 kW) – thanks to revised Borg-Warner variable turbine geometry (VTG) turbos. The facelifted 911 Turbo was only available with a manual gearbox or the optional 7-speed PDK dual-clutch gearbox, which replaces the Tiptronic. 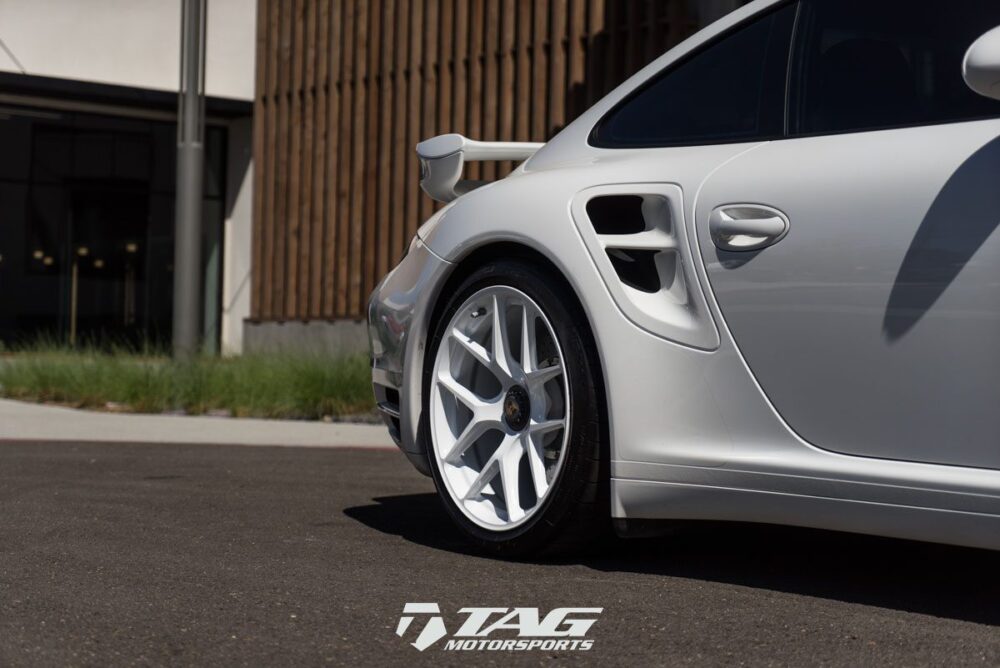 Yes, all impressive numbers. But the reality is that the 997 Turbo does shows some signs of old age and some modding to return it to contemporary looks was needed. Hence, TAG Motorsports was called upon, installing a set of clean & subtle HRE Performance Wheels for this build.

The wheels chosen are HRE R101 Wheels in Gloss White finish. Working remarkably well with the white Porsche 911 Turbo, they give the vehicle a much needed exterior upgrade to fine tune its looks overall. The carbon-ceramic brakes, with yellow painted brake calipers, come to full view thanks to the white finish of the wheels themselves. The full media gallery of this Porsche 997 Turbo build is available right below.